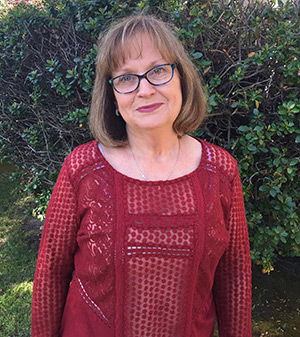 Goes for the heart...

When life threw Judy Duarte a curve twenty years ago, she did what many newly single mothers do. She pulled herself and her four kids together, became even more determined to come out on top, and decided to start following her dreams. What better role model could she provide her children than to show them that anything is possible? So, she returned to school, graduating from UC Irvine about the same time her oldest kids hit the teen years.

With her dream of getting her degree having come true, another dream presented itself by way of a new, perfect mate. Life was good again, but one dream still nagged at her:

"I always knew there was a book inside me, but since English was my least favorite subject in school, I never considered myself a writer."

All her life Judy has been spinning stories--telling tales to her kids as they grew up, plotting stories and creating characters to fill the time during carpool days and all those commutes back to college...and she never stopped dreaming of putting those stories on paper. Determined to follow her yearnings, she joined Romance Writers of America and met her critique partners Crystal Green and Sheri WhiteFeather (both are now multi-published award-winning authors and the trio have worked together and encouraged each other ever since).

Judy's determination to become a published author grew and she began focusing on creating poignant stories designed to touch a reader's heart. As she fine-tuned her writing style and learned her craft, she found herself writing the stories she liked to read. Stories about families, second chances, and true love. In creating her own happily-ever-after stories she took ordinary characters, put them in emotionally compelling situations, and forced them to grow. They learned, as she had, that when a door is closed, they must look for that open window.

“Since I love books and movies in which people must overcome insurmountable odds to win and earn their happy-ever-after, those are the kinds of tales I like to create.”

Then Judy's dream became a reality in March 2002 when Silhouette Special Edition released her first book, COWBOY COURAGE. Since then, she has published seventeen books and is contracted to write three more. Her stories have touched the hearts of readers around the world. Her tales of redemption and renewed trust generate many fan letters from readers who tell her of the positive impact reading her stories have had in their lives.

A woman who had been shattered by her husband’s recent betrayal and desertion had not been able to read or watch anything that had a romance involved writes: I saw your book in the store, and the title caught my eye. (I have a thing for cowboys.) When I read the back cover, I bought it and couldn’t put it down. I finished it in one day. I still have my doubts about meeting a decent man and trusting again. But maybe in time I will be able to love again. I will be watching for your next book.

“When I received the call telling me I had finaled in the Reader’s Choice, I was thrilled beyond measure. Being judged by real readers and recognized as a finalist was a joy in itself. I went to the ceremony honored to be in attendance. And when they announced me the winner, tears came to my eyes and a lump formed in my throat. It took days for my feet to touch the ground.”

Judy makes her home near the beach in Southern California with her husband, their son, and a cat named Mom. "It gets a bit confusing," she admits, "especially when the cat decides to curl up in a secluded cubby hole and hide. I'm not sure what the neighbors think when my son walks up and down the street calling for Mom."