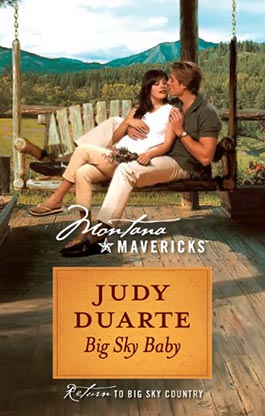 BEST FRIENDS FOR LIFE... AND LOVE

After five years, Jeff Forsythe was finally back in Rumor, Montana—just when Jilly Davis needed him most. But she had no intention of clipping the wings of the footloose pilot just because she was having a baby. Even if her childhood pal was arousing feelings that had nothing to do with friendship...

Freedom at all costs—those were the rules Jeff lived by. Until he came home to find his best buddy all grown up, pregnant—and sexier than he'd ever remembered. Suddenly this irresistible mom-to-be tempted him to trim his wings and put down roots in Rumor. Wasn't that what friends were for?

Jeff Forsythe was back in town.

All right, Jilly Davis thought, maybe temporarily, but he was home just the same. And it was a darn good thing, because she could really use a friend in the flesh right now, not to mention a hug.

When Jeff left to join the forestry service five years ago, Jilly had felt somewhat abandoned. But unlike every other male she'd known, he called her every week, insisting on maintaining a friendship.

Jilly scanned the green, woodsy interior of the florist shop Jeff had loaned her the money to buy. She hoped he liked what she'd done to the place, especially the window display that changed every couple of days.

She'd gotten a deal on Gerber daisies this week, and using pots of the pastel-hued flowers and a quaint cast-iron bench, she'd created a park-like setting to catch the eye of the locals who passed by.

Jeff had always said she was artistic, and apparently he'd been right. Jilly's Lilies was a blooming success.

Imagine that. The scruffy little Davis girl from the wrong side of the tracks was now a genuine member of the Rumor Chamber of Commerce--and a homeowner to boot. That was quite a feat for someone like her to accomplish, especially at the ripe old age of twenty-three.

Who would have guessed?

No one but Jeff Forsythe, that's for sure.

What made their mismatched friendship even more surprising was the fact that he'd been born with the proverbial silver spoon in his mouth.

Jeff often referred to himself as a shirttail relative of the MonMart Kingsleys, but the shirttail had been made of the finest imported silk.

His socialite mother had been Carolyn Kingsley's younger sister, and when she died in a fiery car accident, six-year-old Jeff was sent to live with his aunt and uncle on the Kingsley Ranch.

Jeff was a very wealthy man by virtue of his mother's money alone. The Kingsley riches only added to his considerable worth. But you'd never know it by looking at him. Jeff was one of the most unassuming guys Jilly had ever met.

More times than she could count, Jeff had ventured over to her run-down, trashy side of the tracks, something that had caused his straitlaced Aunt Carolyn a great deal of worry. Still, the social icon of Rumor hadn't been able to discourage their friendship. Nor had the passing of time.

Jilly hadn't seen Jeff in five years, but she doubted he'd changed much. Tall, lanky. Dark hair, nice but serious smile. He was the one constant force in her life.

And her very best friend.

She'd missed him something fierce when he left town, but their friendship continued to flourish over the telephone and through a jillion e-mails.

Who needed Dear Abby when a girl had her very own Jeff Forsythe to keep her in line, to listen to her problems, to encourage her hopes and dreams?

Jilly had a penchant for getting herself into one jam or another, and Jeff's friendship had proven to be an invaluable asset. She had a feeling he actually liked coming to her rescue, although he probably wouldn't admit it. Either way, the years had only deepened their friendship.

Each time the bell on the florist shop door rang, she glanced up from her work, hoping to see her old friend. At a quarter to five the bell chimed again, and this time her glance was rewarded.

Only it wasn't the gangly kid she remembered who stood in the doorway of her shop. It was a tall, dark-haired god of epic proportions--a sight worthy of a gasp, a second glance or an all-out gaping stare.

Lanky Jeff Forsythe had filled out, grown up and aged to perfection. When he removed his aviator glasses, eyes the color of the Montana sky locked on hers, piercing her heart and sending a swarm of bewildered butterflies to her tummy.

His smile broadened, revealing a set of dashing dimples. "Hey, good lookin'. Where can I find the owner of this establishment?"

"You found her, flyboy." Jilly hoped he hadn't seen or sensed her reaction to the sight of him.

Get a grip, Jilly told herself. It's only Jeff.
"I hope you stopped by to give me a hug," she said, trying desperately to thwart a runaway sexual attraction to her friend.

"It's good to see you, Jilly." His deep voice settled around her, cloaking her in crushed velvet and causing her heart to slip a gear before jetting into overdrive.

She dropped a sprig of greenery on the table and dashed into his arms, eager to feel his familiar embrace.

A musky, woodsy scent accosted her, as he lifted her feet from the floor as though she were merely a rag doll. She struggled to act nonchalant, unaffected by his touch.

Who was this gorgeous guy? And what had he done with her best friend?

"I missed you," she said, although she hadn't realized how much until he'd walked in the door. "Maybe I should hang on tight so you can't get away."

Jeff held Jilly close, savoring the earthy scent of flowers and spice. It had been too damn long since he'd seen the little brown-haired girl with the chipped-tooth smile.

He'd missed her, too.

When he left Rumor five years ago, he had no intention of coming back, other than for visits. It wasn't that he didn't care about his family and friends, but he'd been born with a case of wanderlust and an intrinsic love of flying. By the time he was sixteen, when he'd taken control of his very first plane, a yellow Piper Cub, his life course had been set.

They both knew it was the fire that began near Rumor and continued to rage in the Custer National Forest that had called him back to town indefinitely.

As part of the Modular Airborne Firefighting System, or MAFFS, Jeff had been ordered to report to the fire command center before dawn tomorrow, but he made time for a quick detour by Jilly's Lilies to see his old friend.

God, he'd missed her. Missed her smile, her happy laugh. Missed the tales of her adventures or--more often than not--her misadventures.

Looking out for her had been a job he'd accepted a long time ago, and after five years of hearing her voice and reading her emails, he enjoyed holding her close.

In fact, he was enjoying it way too much.

Before she pummeled his back with her fist, begged to be put down and asked if he'd gone stark-raving nuts, Jeff released his hold and set her feet upon the floor.

He hoped she didn't suspect he'd found the hug far more stimulating than was appropriate, but for some reason she felt good in his arms. Damn good.

As Jilly stood before him, wearing a plain white T-shirt and jeans--nothing fancy--he couldn't help but stare. She wasn't the same skinny kid he'd remembered. She'd grown up and filled out in an alluring, womanly way.

Her brown eyes glimmered like a pool of melted chocolate, drawing him deep into her gaze. He seemed to flounder there for a while.

"What's the matter?" she asked.

Hell, he didn't really know. Or maybe he did and wasn't ready to face the truth. "You've changed."

"So have you." Her mouth quirked into a silly grin, but he couldn't seem to find any humor in the bodily reaction that stirred his hormones and heated his blood.

The girl he remembered was gone, replaced by a woman with an earthy sex appeal he'd never noticed. No wonder Cain Kincaid--the horn dog of the fire department--had chased after her, nose sniffing and tail wagging.

"Nothing." It wasn't exactly a lie. Something was the matter, but he wasn't sure what.

Had her breasts always been that...full? Or maybe it was just the form-fitting shirt she wore. His gaze traveled down to the jeans that hugged her hips, then he caught himself.

For cripe's sake, Jilly was his best friend, not some woman he was trying to hit on.

She brushed a hand across her cheek, pushing aside a silky strand of honey-brown hair, and smiled at him in a shy sort of way.

He supposed she was feeling a bit awkward, like he was, which was odd. They'd always been comfortable with each other, like a brother and sister who enjoyed being together, in spite of occasional squabbles.

Chocolate brown eyes. Honey-colored hair. His appetite had been stirred, that was for sure, but she was talking about food. "I hadn't thought about it, but I suppose so. What do you have in mind?"

"I put a roast in the Crock-Pot at home. If you give me a minute to lock up, we can go to my place and catch up on things."

His aunt and uncle would probably shoot him if they found out he'd stopped by Jilly's before going out to the ranch. Of course, they'd given up on lecturing him ages ago, after that visit to the shrink in Billings.

Jeff couldn't remember the good doctor's name, but the guy had told his aunt to ease up on him. And she had, especially where Jilly was concerned.

"A home-cooked meal sounds good," Jeff said. "Besides, I'd like to see your house."

"I thought you would." Jilly offered him a smile, then grabbed his hand and gave it a squeeze, sending a burst of heat pulsing through his blood. "Come on. Let's get out of here."