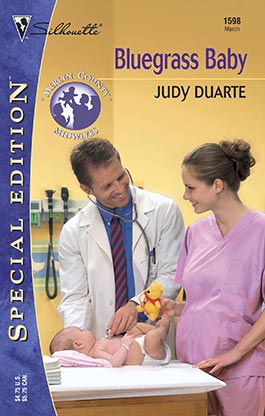 FROM MIDWIFE TO MOTHER-TO-BE...

One night of heart-stealing passion left Milla Johnson wanting much more from Dr. Kyle Bingham. But settling down wasn't in the gorgeous resident's game plan. And the practical-minded midwife had her own future to think of...now that a baby was on the way. Kyle's baby.

Growing up on the black-sheep side of the town's most prominent clan left Kyle feeling out in the cold when it came to family. Until Milla. She had him yearning to shed his solitary ways—even after she'd told him they were expecting! Could imminent fatherhood—and love— make a family man out of Merlyn County's most marriage-shy bachelor?

Milla Johnson pressed the cell phone closer to her ear and glanced around the hospital cafeteria, glad no one could hear her conversation with her mother.

"The Binghams will turn on you," her mom said, "now that you've been named in that malpractice suit."

Milla rolled her eyes. She had enough stress in her life without her mother creating an enemy force out of the town's most prominent family.

"I worry about you," her mom added.

"I'm worried, too." Milla, a midwife for only a year, had been unfairly charged with malpractice, following the home birth of a baby girl. "That lawsuit could potentially end my career before it gets off the ground. And it could shut down the Foster Clinic's unique home-birth program."

"That's what I mean about the Binghams turning on you." When Milla didn't respond, her mother asked, "Did you hear what I said?"

Actually, the words rang loud and clear, but listening to unwelcome advice was another story. Especially when the Bingham family wasn't responsible for the lawsuit. "I'm sorry, Mom. It's a bit noisy in here."

Milla stared at the plate of meat loaf in front of her, then shoved it aside. She'd thought the mashed potatoes might sit well. Now she wasn't so sure. Her stomach had been a mess ever since learning of the malpractice suit, more so now that she'd talked to her mom.

"You watch your back, honey."

"I'll be careful." Milla felt badly enough about being blamed for something that hadn't been her fault and for the problems the lawsuit would cause the Bingham Foundation. She didn't need a dose of maternal paranoia to complicate things.

Her mother had never made a secret of her distrust of the Binghams, but Milla was grateful to them. The family had done a lot for Merlyn County, and the Bingham Foundation had provided the grant that had paid for her midwifery education. True, she agreed to work for the clinic for the next five years to pay back the funds, but she loved her job and the professionals with whom she worked. She couldn't imagine working at another clinic. Or worse, if the plaintiffs had their way, not working as a midwife ever again.

"Those people have brought nothing but heartache to our family."

"By 'those people,' you mean Billy Bingham in particular. And the man has been dead for eight years, Mom."

"Your aunt Connie died giving birth to one of Billy's illegitimate babies."

It was an age-old complaint and one Milla had grown tired of hearing. Her mother had never forgiven the man she blamed for her sister's death, a man who died in a plane crash months before his youngest son's birth.

Milla and her mother had raised the boy in their cramped, two-bedroom home since the day he was born. They both loved Dylan, in spite of his penchant for mischief. But oftentimes the money had been scarce, and even Milla had to admit life would have been easier on the Johnson household had Billy Bingham provided for Dylan the way he had for the other children he'd fathered without benefit of marriage.

Desperate to change the subject and to fast-forward the conversation5, she said, "I'm going to stop by the market on the way home. Do you need anything?"

"Anything else?" While her mother recited a list, Milla glanced up and saw Dr. Kyle Bingham enter the busy cafeteria, and her heart skipped a beat.
The good-looking resident spotted her, too, and grinned, sending a jolt of awareness to jumpstart her pulse. Kyle had turned her head on more than one occasion, and the attraction seemed to be mutual.
He headed toward her table.

"Listen, Mom, I've got to go. I'll buy the groceries after I pick up Dylan from day camp. I'll talk to you later."

"Just remember what I said about the Binghams. Watch out."

"I will," Milla said, although the only thing she felt like watching was the blond Adonis coming her way. For some reason she didn't even want to ponder, his smile had the power to make her heart rate go absolutely bonkers.

Tall, broad-shouldered and more handsome than a man had a right to be, Kyle Bingham had a flashy wardrobe, a promising medical career and no financial worries, even after attending Harvard Medical School. The guy could have more than his share of women--and probably had. So the fact that he found Milla even remotely attractive was flattering. Thrilling.

As he approached her table, she tried to come up with a reason why she didn't need to get involved with him--anything other than her mother's warning.

"No." Milla shoved her phone back into her purse, setting it aside just as she had her mother's warning. Even if she'd wanted to be mindful of the well-intentioned maternal advice by avoiding the Bingham family--which Milla didn't--avoiding Kyle wasn't the same thing.

Kyle was one of Billy's illegitimate children. And from what Milla had heard, he didn't have much to do with the other Binghams who'd been blessed with legitimacy.

Of course, watching herself around the man for other reasons might be wise. The young pediatrician was a bit cocky and on the arrogant side, although Milla could understand why. Kyle Bingham was a brilliant young doctor, and he knew it. She couldn't fault him for having self-confidence.

Kyle took a seat across from her and cut right to the chase. "I want to testify on your behalf in that lawsuit."

"You do?" Relief washed over her, and she had to struggle not to fall at his feet and gush her appreciation. As the attending physician on call when Joe and Darlene Canfield had rushed their sick newborn to the E.R. of Merlyn County Regional Hospital, Kyle would make an excellent witness.

"You and I both know that umbilical infections don't happen at birth. That baby's illness wasn't caused by anything you did or failed to do."

Milla knew it hadn't been her fault. In spite of what the Canfields had said, she'd taken every precaution. She'd cut the cord textbook perfectly. And before she left the house, she'd told the new parents how to care for the umbilicus. She'd also advised them to bring the baby in for a postnatal exam, something they'd neglected to do.

"You have no idea how much I appreciate you saying that," she said.

"The Canfields had bandaged the umbilicus, which first alerted me to the probable cause of the infection."

Milla had told them to keep the umbilicus clean and dry. And she'd not only shown them how, she'd left them with printed instructions, although the lawsuit claimed she'd haphazardly cut the cord and left two new parents without any direction at all.

"After the baby stabilized, I took time to talk to Mrs. Canfield and question her. They hadn't cleaned the umbilicus properly, and in addition, the disposable diapers she was using were entirely too large, which irritated the stump. At that time, they applied the bandage."

"Which kept the umbilicus moist, instead of dry."
Kyle nodded. "Mrs. Canfield was also having nursing difficulties."

"Is she claiming that was my fault, too?" Milla asked. "I worked with her at length before leaving the house. They baby took right to the breast, and they didn't seem to be having any trouble."

"She didn't blame that on you. But I don't think she was comfortable breastfeeding, and I'm not sure how often she nursed the baby, which might have compromised the infant's immune system."

Milla blew out a sigh of relief, glad to have someone else realize she hadn't been at fault.

"The Canfields claim the umbilicus was already infected before they bandaged it," Kyle added, "which is probably the argument their attorney will use."

"So, even with your testimony, this lawsuit may not be settled easily."

"Who knows what will happen with the attorney involved. But the baby's infection wasn't your fault."

"And you'll testify to that?"

In her heart, she knew she'd done everything right during that delivery. But it was important to know that Kyle had agreed to testify for that reason alone, and not because he ultimately meant to protect the Binghams, the foundation and the clinic.

"And what if you thought the infection had been my fault?" Milla asked.

He leaned forward, assessed her as though she'd accused him of moral ineptitude. "I'd have no qualms about testifying against you or the Foster Clinic if I thought that infection had been caused by professional negligence."

For the first time since being served notice of the lawsuit, Milla began to breathe easier.

She had someone on her side.

And not just anyone.

"By the way," he said. "I've got to get back to the E.R., but I wondered if you might like to have dinner with me tonight."

Dinner? With the best-looking doctor in all of Merlyn County? Was it a professional meeting? Or was it more like a date? She couldn't be sure, yet when his blue gaze caught hers, her heart fluttered and something powerful passed between them.

Her mother would throw a wall-eyed fit--if she found out. But what Sharon Johnson didn't know wouldn't hurt her. Milla might live under her mom's roof, but not under her thumb. Their living arrangement had more to do with finances. And, more recently, Dylan's well-being.

"Sure," she told the handsome resident. "I'd like to have dinner with you."

"I'll pick you up around six, if you'll give me your address."

Uh-oh. That might not be a good idea. Milla wasn't up for another a defensive bout with her mother this evening--not at this point in what might or might not develop into a relationship. She'd need time to work on her mom, more time than she would have between now and six o'clock. "Why don't I meet you at the restaurant?"

"All right, if you're more comfortable doing it that way." Kyle slid her a heart-stopping grin. "I'll see you at Melinda's. Around six."

Milla merely nodded, afraid her voice would betray her nervousness.