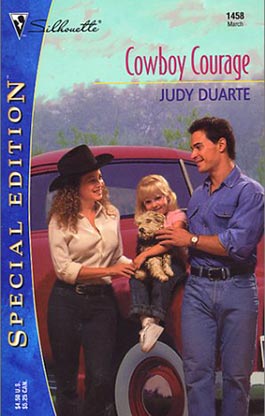 Shattered by her fiancé's betrayal, Lauren Taylor fled California and her society engagement. In a small Texas town, she found a place for herself in the gentle arms of rancher Cole McAdams. He was as honest as the day was long...and as guarded.

HE'D GIVEN HER SHELTER FROM THE STORM.

Cole had enough problems keeping his ranch afloat and raising his daughter alone. He'd trusted a woman once and been burned, and he knew Lauren had secrets of her own. But in a time of crisis, could this cowboy find the courage to put the past behind him and finally embrace a future...with her?

Gray storm clouds loomed overhead as Lauren Taylor peered through the bug-splattered windshield, trying to spot a place to eat, somewhere she wouldn't be recognized. A place where she could slip in, blend into the scenery and hide.

The darkened sky hid the afternoon sun and chilled the air. For the first time since yesterday, Lauren felt the need to slow her aimless pace and find shelter. She glanced at the gas gauge. Although she had nearly a quarter tank, she decided not to risk being stranded along the road.

Texas had never been her destination. When she'd sped away from the Southern California estate she and Daniel had just leased, she hadn't been steering toward any place in particular. Heading east on Interstate 10 had seemed as good a direction as any on her trek to nowhere.

She'd never had a hint of a flight plan, but as she crossed the New Mexico border into Texas, a strange but soothing realization had struck. Lauren was going home--home to the state where she'd been born and raised in love--as well as poverty. Where she'd also been orphaned and left to the wolves, so to speak.

Lauren stole a glance in the mirror, in spite of a reluctance to do so. After more than thirty hours without sleep and nearly twenty on the road, she had no doubt that her appearance was far from the usual neat and fastidious image she had always conveyed.

An image, a façade, an act. Funny how she'd never realized it until now.

She sighed, deciding to freshen up once she stopped. A bulging canvas tote rested on the back seat, packed with cosmetics and personal items intended for a trip to the gym she'd never made. Usually, when she'd felt angry or stressed, a good workout did wonders. But yesterday afternoon, nothing would have eased the devastating shock resulting from the telephone conversation she'd overheard.

She'd never meant to eavesdrop, but when she'd heard the sensual tone of a familiar female voice, and then Daniel's husky whisper, she couldn't hang up.

I miss you, Daniel.

When can I see you again?

This evening, if you can get away.

Michael will be in surgery all afternoon, and you know how fussy he is about staying at the hospital until his patients leave the recovery room.

I'll tell Lauren I have to meet with campaign supporters.

I can't believe she never questions you.

Don't worry about her. She'll be a perfect wife.

Lauren's head had pounded, and her throat constricted. She'd held the phone to her ear until well after Daniel and Denise had hung up, her fingers clutching the cold receiver in a death grip until she heard water run in the upstairs shower.

And that's when she'd felt the urge to break something, to throw a temper tantrum that would make a spoiled rich child proud.

The roar of a semi barreling down the interstate drew Lauren back to the present, and a rumble in her stomach reminded her why she needed to stop.

Up ahead, she spotted a rundown gas station, the kind she'd seen in old black-and-white movies. A red, restored Ford pickup parked in front of one of the old pumps added to the nostalgic ambiance.

Lauren clicked on the blinker and checked the rearview mirror before swerving onto the unpaved parking lot. Gravel crunched under her tires and dirt swirled like the first stirrings of the tornado that landed Dorothy in Oz. When the dust settled, she adjusted her sunglasses and surveyed the 1950s surroundings.

Cole McAdams placed the nozzle of the gasoline pump into the tank of his '53 Chevy, then crossed his arms and leaned against the vintage truck. A white, late-model Ford Expedition pulled in beside him, and he watched a tall, willowy blonde emerge.

Model-thin, with a sophisticated air, she wore tight-fitting jeans that hugged narrow hips. A big brass clip held her golden hair in a twist. Dark glasses hid her eyes.

A classy lady. And definitely out of place in a small Texas town like Tannen.

When she disappeared into the filling-station office, Cole turned his attention to her sports utility vehicle.

Nice set of wheels, and fully loaded, no doubt. He glanced at the out-of-state plates. California. That didn't surprise him.

Cole replaced the pump and twisted the cap back on his tank. The wind hit the brim of his Stetson, and he adjusted the hat more securely on his head. The rain wasn't far off and, most likely, would turn into a gully washer. A flash flood warning was in effect, and if the sky was any indication, the boys down at the weather station had called it right.

He reached for the door handle, just as the blonde stepped from the building, opening a road map while she walked. Yep, definitely out of place. And probably lost.

She studied the unfolded sheet while making her way toward the Expedition. A gust of wind caught the paper from her hand and, like a kite out of control, the map flew from her grasp.

Cole wasn't sure why he went to her aid. He didn't harbor any unusual sense of gallantry, but the poor thing looked on the verge of tears. He snagged the wayward map and returned it to her.

"Thank you," she said, her voice soft and caressing.

Where was she headed? Where had she been? He quickly dismissed the curiosity. What did he care? She was a stranger, for Pete's sake. And on her way down the road. Yet he couldn't help but offer some minor assistance. "Need directions?"

It seemed like a dumb question, even to Cole and, for some crazy reason, he hoped she didn't think he was a backwoods cowboy. She looked carefully at him, albeit through dark lenses.

Assessing his trustworthiness, Cole assumed. Still, he wondered about her, too. Like what color eyes those sunglasses hid. And what secrets those eyes held inside.
"Where's the nearest hotel?" she asked.

Hotel? In this town? He stifled a laugh. "Up the interstate about twenty miles you'll find a few cheap motels."

She nodded as though one of those roadside places would suffice, but he doubted she'd ever experienced anything that wasn't expensive. Her appearance and bearing gave evidence of a wealthy lifestyle. She offered another smile that produced only a single dimple. A man could look forward to making her smile, just to see it.

He chastised himself. This woman was none of his business, nor his concern. He had enough problems of his own, and he sure as hell didn't need to be thinking about her in any manner other than sending her on her way.

She started toward her vehicle, then paused and turned back to him. "Is there a restaurant nearby?"

He nodded, not sure whether she'd consider the Long Shot a restaurant. "There's a little hole-in-the-wall just down the road. The atmosphere is lousy, and it's more of a bar than a diner, but the food is good. Otherwise, you won't find anything else for the next twenty miles or so."

"Thanks." She flashed him another one-dimpled smile and filled her tank.

Cole stood beside his truck and watched until she drove off. Hell, he almost wished he could have done more for her. Then he slowly shook his head and climbed into his truck.

There wasn't a damn thing Cole McAdams could offer a woman like her.