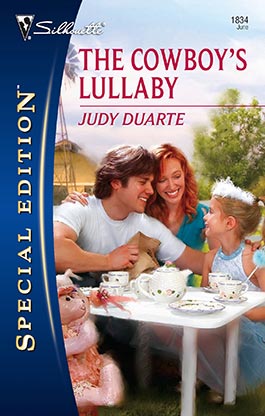 Conservative businessman Jake Braddock had a heart that was all cowboy--and closely guarded.  Following his stepmother's death, he learned he'd be sharing custody of his five-year-old half sister with a sexy dancer--not his notion of the ideal mommy.

Chloe Haskell had barely begun playing mother to little Brianna when she found herself at odds with stuffy Jake, who seemed determined to fight her at every turn.  But the long-legged beauty soon got under the Texan's skin in more ways than he cared to admit.  Now Jake had to decide whether he was ready to let Chloe into his heart--and help him build the family he'd always wanted...

Jake Braddock was nursing a Mondaymorning hangover and brewing a pot of coffee when the call came in, telling him that his stepmother, Desiree, had passed away.

"What do you mean she passed away?" he asked the hospital spokeswoman. Desiree hadn't even reached her fortieth birthday.

"Officially the cause of death was pneumonia. But it was cancer related."

Jake pulled out the black–and–chrome bar stool nearest to the phone line and took a seat, raking a hand through his hair. He cursed the throbbing in his head, which was now pounding like a son of a gun.

"I didn't know she was sick," he muttered. Not really. Well, not that sick.

A week or so ago, when she'd returned from San Diego for the last time, Jake had taken a good hard look at her and noticed dark circles under her eyes and a wan complexion. When he'd suggested she see a doctor, she'd said not to worry, that she was under medical care.

he'd suspected she was ill, but he hadn't had any idea that her condition was terminal.

"I, uh…" He stumbled over an explanation. "She and I…weren't very close."

Apparently not, the silence seemed to say. He cleared his throat, hoping to clear his head, as well. "Let's start over. I knew she was sick, but she never mentioned cancer."

Or told him that she was dying. "I'm sorry for your loss," the woman said. "Mrs. Braddock made all of her arrangements, so there isn't anything for you to do. I'm just following hospital protocol by notifying the next of kin." "Then, I guess, that's me."

"And Chloe Haskell in San Diego."

"I don't know, sir. Mrs. Braddock listed the two of you as her next of kin."

"What about her daughter?" he asked.

"Would that be Ms. Haskell?"

"No, it wouldn't." Well, hell. Maybe it was. He supposed Desiree could have another child. Older, maybe. Grown. Like him. He hadn't really known his stepmother that well, other than the fact she'd been a topless dancer before marrying his old man.

Either way, now he'd have to tell Brianna, his nearly five–year–old half sister, that her mommy had died. Of course, he'd have to find her first. Desiree had been traveling back and forth to San Diego for the past couple of months, but last week she'd returned to Dallas without the child.

And that was odd.

Jake might have issues with Desiree about a lot of things, but he'd come to realize she was a devoted mother. At least, that had been his opinion before she'd left Brianna in San Diego.

When he'd questioned her about it, she'd said, "Brianna is staying with a dear friend. She's happy and well cared for."

Jake didn't know much about his stepmother's friends, although he suspected they all worked at the same San Diego strip club Desiree used to manage, so he had good reason to feel uneasy.

Maybe Brianna was with Chloe—whoever she was.

"There's no one else on my contact list," the spokeswoman said. "Just you and Miss Haskell, whom I've already called."

The hospital had notified someone other than Jake first?

He cursed, although he wasn't sure whether it was at the news he'd just heard or the hammering in his head and the bile swirling in his gut.

"I'm sorry," the woman on the line said. "Is there someone I can call for you? Perhaps a grief counselor from hospice?"

"No. This is just a…" He was going to say it was a shock, but he bit back the rest of his sentence. Desiree was his stepmother, and she lived…well, she used to live just an hour or so away from him. Her death and the fact that she'd been suffering from cancer for God–only–knew–how–long shouldn't have come as a surprise. Not if she'd kept him more in the loop.

Of course, once his sixty–year–old father met her on a cruise ship, Jake and his wishes had been bypassed entirely. Talk about a midlife crisis. His old man's had been a humdinger.

Gerald Braddock had always been conservative in everything he did, but he'd fallen head over heels for a former topless dancer, who was twenty–eight and young enough to be his daughter. And he'd married her faster than a spinning tassel on a pastie.

Okay, so his dad had seemed happier in the past six years than Jake had ever seen him before, but that was probably because of Brianna, the daughter he'd fathered with his new wife.

An only child, Jake had always wanted a brother or sister, but he hadn't planned on getting one when he was twenty–eight. Still, Brianna was a cutie and had quickly wrapped her big brother around her little finger.

Jake didn't see her as often as he would have liked for several reasons. For one thing, his business ventures kept him busy. And for another, he tried to avoid Desiree whenever he could.

Desiree broached him about it a couple of times, implying she wanted to be on friendlier terms, but even after he'd gotten over the shock of his father's second marriage, he just couldn't bring himself to accept his new stepmother as a part of the family.

"I'm sorry for your loss," the hospital spokeswoman added.

When the line disconnected, Jake continued to grip the receiver as though he could somehow gain control of everything that had slipped out of his hands—first his father's marriage and then his death.

Jake had never liked Desiree. Of course, if truth be told, he'd never given her a chance, even though his father had repeatedly asked him to. But how could he when the young woman had married his old man for money?

The proof came when she hightailed it to an attorney to amend the trust the day after Gerald Braddock's funeral.

On Jake's part, the issue had little to do with greed. he'd been successful in his own right. He also held fifty–one percent of the stock in Braddock Enterprises, a Dallas company that oversaw various oil and petroleum–related business ventures. He didn't like to boast, but the value of each share had nearly doubled since he'd taken the helm.

So it wasn't the money he was after. Jake just didn't like the idea that his father had been hoodwinked by a woman who didn't fit into his social sphere. A woman who'd convinced him to spend more time at the ranch and less in the city, where he had a spacious, luxury home that was much closer to the office.

Of course, Desiree had absolutely no class when it came to high–society expectations, so it was no wonder his dad had gravitated toward the ranch and started playing cowboy, even though he was in his sixties.

He was also playing daddy, a small voice reminded him. And doing a better job of it the second time around.

Jake's thoughts immediately turned to Brianna, to the orphan who needed him to step up to the plate and play daddy now.

But he didn't know where to find her.

He could hire a P.I., but a call to Desiree's attorney might provide an immediate answer. He pulled out the phone book and thumbed through the pages until he found a number for Brian Willoughby, Esquire.

A receptionist answered and, when he told her why he'd called, she put him on hold.

Seconds later, the attorney came on the line. "Hello, Mr. Braddock. I've been expecting your call."

Yeah, well, it looked like everyone in the world knew about Desiree's cancer–everyone but Jake. And the whole sorry, rotten mess put him in a foul mood. Hell, he'd felt better when he'd only had a hangover to deal with.

"I was sorry to hear that Desiree passed away," Willoughby added.

he'd already heard? The pounding in Jake's head grew more insistent. "How did you find out about her death so soon?"

"Ms. Haskell called a few moments ago." Jake had the urge to hurl the telephone receiver across the room. Who the hell was that woman?

"That doesn't surprise me in the least." Jake figured she'd been itching to get her hands on the money and take control of the company the moment she stepped foot on that cruise ship and scoped out Gerald Braddock.

Damn. He still couldn't fathom the two of them together.

"Desiree was a courageous woman," Willoughby said. "And strong. I came to admire her a great deal."

"Well, since you seem to have such a clear understanding and appear to be more aware of what's going on than I am, tell me where I can find my sister."

"She's in San Diego with Ms. Haskell. And from what I understand, she's doing as well as can be expected."

"If you'd be so kind as to give me an address, I'll get a flight out today and pick her up."

"That won't be necessary."

Jake bristled. "What are you talking about?"

"Desiree has left temporary custody of Brianna to Ms. Haskell, at least until the will is read. However, there are a few stipulations and particulars I need to discuss with both of you at the reading regarding joint custody. And unfortunately, I'm not available until Friday morning. Ms. Haskell said that works for her. I hope it fits your schedule, too. Otherwise, we'll have to postpone our meeting until next week."

"I'd rather not put this off any longer than necessary." Jake was already reaching for his Blackberry, eager to call in his own attorney. No, make that an entire law firm. This was crap. And he would contest the will at the top of his legal lungs.