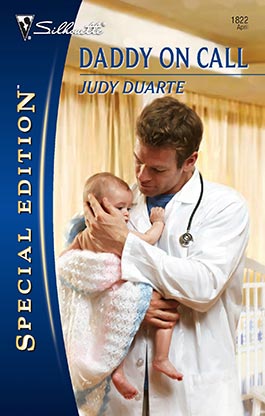 Turning his life around, Luke Wynter had worked hard to become a doctor, to give back to the community he’d taken from years ago.  And he had been doing just fine…until Leilani Stephens snuck back into his life.  Twelve years ago she had made it clear that she no longer considered him a friend, let alone a love.  And he’d never been one to plead or beg.

Now he felt drawn to her all over again—yet felt that something was unsettled, unfinished.  Unsaid.

What had Leilani been hiding from him all these years?

Dr. Luke Wynter had only started his shift an hour ago, but he'd already sent his third broken bone of the day up to radiology, stitched up a nasty wound on an elderly woman's brow, admitted a five-year-old for dehydration and diagnosed three cases of the flu that had been plaguing the area.

"Doctor, we've got an ambulance coming in with a pregnant woman who's been badly beaten by her boyfriend."

Luke glanced up from the chart he'd been reading and addressed Marge Bagley, a fifty-something RN who could run circles around the first-year residents and mentor those who'd acquired their fair share of rotations. "What's the estimated time of arrival?"

He nodded, then quickly completed his task.

Marge was one of Luke's favorite nurses. Together, she and he worked the night shift at Oceana General. He wouldn't say they'd become friends, since they never associated outside the hospital, but they'd developed a healthy respect for one another and had shared plenty of overbrewed coffee.

Luke had a few friends, mostly the guys who'd become known as Logan's Heroes, a group of men who'd once been delinquents but had turned their lives around thanks to the guidance of Detective Harry Logan. But for the most part, he didn't socialize much. Hell, how could he when he worked nights and required a few zees to function?

"Showtime," Marge whispered, as she nodded toward the paramedics rushing through the door.

"Take her into room three," Luke said as he walked alongside the stretcher, conducting a quick assessment of the victim's injuries and taking note of the vitals being announced by Craig Elwood, oneof the paramedics.

"Who did this to her?, Luke asked.

"Apparently, a jealous boyfriend. He held the cops at bay for a while, then slipped out the back."

The bastard had done a real number on her, and Luke hoped the police caught the guy. he'd be facing assault charges if she lived, homicide if she didn't.

Marge, who walked with them, asked, "Does she have any family members coming in?"

Luke knew the RN was asking about next of kin.

"She's got a friend coming in behind us, driving her own vehicle. Her name's Lonnie, I think. The patient's name is Carrie Summers."

Luke nodded, then ordered a battery of tests and scans. The patient—or rather the victim in this case—had suffered a dislocated jaw, a head injury and possible internal bleeding. Luke wasn't sure whether he could save her life, let alone that of the baby she carried.

But he was up for a fight. In fact, he always had been, only now he battled death.

Luke liked working with Marge. She seemed to know what he was thinking. During the downtime, when they were free to make light of things, he called her "Radar," like the character on M.A.S.H.

Always one to dish it back, Marge referred to him as Hot Lips, although he suspected it had nothing to do with the classic television show and everything to do with a particular blonde lab technician who'd kissed and told.

As Luke worked on the patient and ordered more tests and scans, Dick Wofford arrived, followed by Arlene Gray. Together, they decided the best treatment for mother and child. Neither specialist was any more optimistic than Luke, and both commended him for his treatment thus far.

Marge, who'd slipped out of the room momentarily, returned. "The victim's friend just arrived, and I sent her to the waiting room near the ICU."

It was, Luke realized, the best place for the friend to wait. The neurosurgeon would be making the call on whether the critically injured woman needed surgery or not, but either way, she would be spending time in intensive care.

After passing the patient on to the specialists, Luke headed for the waiting room to find Carrie's friend.

Talking to loved ones was his least favorite part of the job. His bedside manner had never won him any accolades, but he didn't care. He couldn't afford to let the patients or their families get to him. Keeping some emotional distance allowed him to do what he did best—save lives.

He paused in the doorway and scanned the handful of people waiting for word on friends and family members. An elderly couple rested on a sofa near the television, holding hands. A middle-aged man sat alone in the corner, reading a magazine, while a dark-haired woman wearing a silver clip in her hair stood at the window, looking into the dark of night. "Who's here with Carrie Summers?, he asked.

The woman peering out the window turned to face him. When her gaze met his, the past slammed into him, causing his mind to numb and his pulse to jam.

Recognition crossed her face. Shock, too. He supposed he couldn't blame her, since she'd pretty much considered him a juvenile delinquent the last time he'd seen her. And here he was now—the attending physician in the E.R. of one of the county's busiest hospitals.

Of course, the fact that he'd turned his life around and had morphed into a doctor had surprised a lot of people.

She neither smiled nor frowned, which made it tough to regroup, to gather his wits. Or to rein in emotions that threatened to run amok.

Leilani Stephens had been his first love, and not many days went by that he didn't think about her. Dream about her.

As a kid, he'd been in awe of her lovely hula-girl shape, year-round tropical tan and knockout smile. But it had been more than her physical attributes that had caught his eye and kicked up his hormones. Her innocence and sweet nature had slapped him with a full-blown case of puppy love.

Even so, it hadn't been her memory that had haunted him for the past twelve years. It had been her parting words, the anger in her voice and the tears in her eyes that had burned into his soul.

She'd held Luke responsible for her younger brother's death. And she'd never forgiven him for it.

When push came to shove, he supposed he'd never forgiven himself, either. No matter how much time had passed. Or how big a change he'd made in his life.

But he wasn't the only one who'd changed. Leilani was no longer the teenager he'd once loved, either. No longer the seventeen-year-old Polynesian beauty with silky, waist-length black hair who could turn a guy's heart inside out. She'd grown older and undoubtedly wiser.

Yet her gaze still had the power to take his breath away.

"Luke," she said simply, her voice a bit more mature, but still as soft and melodious as he remembered.

He regretted his response the moment it left his mouth. It probably sounded as though he was flaunting the medical degree he'd fought long and hard to earn. Instead he'd only meant to validate himself in her eyes. To let her know a lot had changed since her brother had died and she'd shut him out of her life.

That she could trust him now.

She cleared her throat as though still trying to take it all in and decide how she felt about it. "The nurse mentioned Carrie was being examined by Dr. Wynter. But I had no idea."

"I can understand why."

He led her down the hall to the room set aside for giving a patient's family bad news. Not that he would paint a dark picture. It was too early to tell for sure. But the guy who beat Carrie had nearly killed her, and she was a long way from being out of the woods.