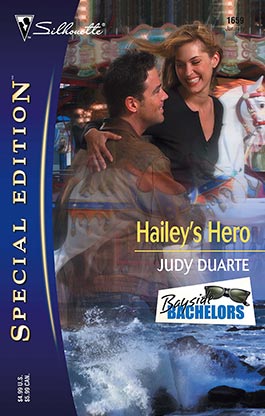 SHE DIDN'T BELIEVE IN HEROES

Hailey Conway believed in making a good predictable life for herself. Until San Diego detective Nick Granger saved her from a mugger and swept her off her feet—and into bed. Their steamy one-night stand was almost enough to melt the snow that had stranded them together...and then they said goodbye.

Except Nick's dark eyes and whispered endearments haunted Hailey's dreams, and continued to set her world on edge. For their night together had conceived more than insatiable passion. They had a baby on the way. And when Hailey shared her secret, she knew the rugged rebel might break her heart...unless he became the hero who saved it.

Hailey Conway didn’t believe in heroes. And hadn’t since her sixth birthday.

Over the years, she’d accepted the fact that a woman couldn’t expect someone to rescue her, to step in and make life picture-book perfect.

So when Hailey walked out of the Granville drugstore and a young man jerked on her black vinyl purse, she didn’t scream for help. Instead, she struggled with the thug until he knocked her fanny first on the sidewalk.

At the gas station across the street, a tall, dark-haired stranger in a leather jacket yelled to the attendant to call the police, then took off in pursuit of Hailey’s mugger.

Heart pounding and hands trembling, she stood on wobbly legs and grimaced at the pain in her right hip. She didn’t think anything was broken, but her bottom hurt like the dickens. She brushed the dirt from her wool slacks and looked down the street. Both suspect and stranger were long gone.

And so was her oversize purse. But it wasn’t her cash and credit cards she worried about. It was the package she’d discreetly slipped inside that concerned her. A package she’d traveled twenty miles to buy.

Now she was not only missing her purse and her purchase, she was rubbing an aching rear end.

A police cruiser pulled to a stop in front of the drugstore, and a stocky, red-haired officer climbed from the car. “What seems to be the problem, ma’am?”

Hailey explained what had happened, then pointed in the direction the mugger and the stranger had run.

“Hailey Conway.” She hoped she wouldn’t have to list the contents of her missing purse. Wallet, thirty-seven dollars in cash, a library card, house keys, a pack of spearmint gum.

And a brand-new box of condoms.

Sheesh. She’d never purchased prophylactics before, had never needed to. But she had big plans for the evening, big enough to make her brave a pending winter storm and travel to a nearby town where she desperately hoped the Walden School librarian wouldn’t be recognized.

So far, her identity was safe, but the whole experience had been a nightmare of embarrassment. The elderly cashier had fumbled about, looking for a small bag, while the darn condoms lay in plain sight on the countertop. Hailey had told the slow moving woman not to bother and quickly stashed the box and receipt into her purse.

“Is that the guy, ma’am?” The burly policeman nodded up the sidewalk, where the stranger had brought the mugger to justice.

If Hailey wasn’t mistaken, it appeared the teenage hoodlum wore handcuffs. “Yes, the big kid in the blue ski jacket is the one who stole my purse and knocked me down.”

The officer took her address for his report. “Wait here,” he told her before proceeding down the street toward the apprehended mugger. The dark-haired stranger withdrew his ID, a badge of some kind, which seemed to satisfy the Granville patrolman.

While the thief was read his rights, then placed into the police car, the stranger sauntered toward Hailey carrying her purse. He had the look of a guy who wasn’t afraid to take chances, of one who’d seen the seedy side of life. A man who didn’t belong in what was supposed to be a crime-free small town. A worn, black leather aviator jacket suggested he didn’t even belong in Minnesota during the winter.

“Are you all right?” he asked, his voice deep and slightly graveled.

“Fine,” she said, although her bottom still hurt.

He handed her the purse, and she clutched it to her chest like a shield, protecting her from his caffeine-laden gaze and the quirk of a smile that taunted her senses without betraying his thoughts.

“No problem.” He stood tall, more than six feet. Not handsome in the classic sense, but attractive in a young Marlon Brando way.

If she were the kind of woman in search of a hero, this guy would fit the bill. But she wasn’t looking for a savior. In her experience the heroic side of a man only masked flaws of one kind or another. Heroes were just regular guys who sometimes did something honorable.

He nodded toward her black vinyl shield. “You’d better check and make sure everything is there.”

Open her purse? With the telltale box of condoms shoved on top? Bare her secrets in front of this stranger? “I’m sure everything is fine. Thank you for going after that guy and getting my purse back.”

“No problem,” he said, as though he risked his life and chased danger on a daily basis.

She offered him a smile, yet held tightly to the ugly but serviceable handbag, her palms sweating in spite of the chill in the air. Surely he’d forget about asking her to peek inside.

“Better take a look,” he said, tapping the bag with his finger.

Hailey stepped back and, in an effort to pull the vinyl bag from his reach, the darn purse slipped from her hands and dropped to the ground. In a frozen stupor, she watched the shiny new box of condoms slide onto the sidewalk, all the while praying a hole in the concrete would swallow her up. But she remained standing, her gaze locked on his.

A slow grin tugged on his lips. “Shoplifting?”

“Absolutely not.” Hailey stooped and shoved the box back in her purse. “I have a receipt. You can ask the cashier.”

When she stood, he flashed her a sexy, Marlon Brando smile. She didn’t return it. “Like I said, I have everything I need.”

The moment the statement left her mouth, heat flooded her cheeks. She’d implied that she needed condoms. Darn that man for flustering her so.

“The name’s Nick Granger. I’m an off-duty detective.” He flashed her a badge of some kind, but she didn’t take the time to look at it closely, particularly since it had passed the police officer’s scrutiny.

Ever since her sixth birthday, Hailey had sworn off cops, particularly handsome detectives. As far as she was concerned, they were never around when you needed them.

Of course, this particular cop had been.

“Thanks for your help,” she said. “Now if you’ll excuse me, I have to go home and fix dinner.”

Nick bit back a laugh. He didn’t usually tease a crime victim, but the rosy-cheeked brunette who hid condoms in her purse had touched his funny bone, not to mention his libido.

The petite young woman had a pretty face, with long chestnut hair and eyes the color of a summer sky. But it was more than her looks that he found arousing. It was the way she lifted her chin and showed a stubborn sense of pride. The flash of spunk, as she pulled herself together. The shy, awkward way she wanted to hide the condoms from him.

He watched her limp away and climb into a ten-year-old Honda Accord. Some guy was going to get lucky tonight, and he couldn’t help wondering who it would be.

A husband? No, not a spouse. She was too flustered about the condoms, too shy about them for that. A secret lover then? The idea warmed Nick’s blood and made him grin. He wouldn’t mind being the lover in question.

Whoa. Back up. He hadn’t come to Minnesota to fantasize about an affair with a stranger. He had a mission.

He was looking for a woman who lived in Walden, a small farm town about twenty miles from here. The attendant at the gas station had been explaining how he could reach the county road that would take him there when he spotted the purse snatching in action.

A cold wind blew out of the north, hinting at the snow to come. Nick zipped his black leather jacket. Minnesota was a hell of a lot colder than southern California.

When he left home this morning, the weatherman had predicted a sunny day in the high eighties. And had his old friend and mentor not needed his services, Nick would have spent the afternoon on the sands of Pacific Beach.

But late last night, Harry Logan had called from his hospital bed to ask a favor, and Nick hadn’t given the request a second thought. He owed the retired detective—big time. If not for Harry’s involvement in Nick’s sorry life, he might be rotting in prison right now. Or dead.

Harry had given more than one angry delinquent reason to look beyond a crappy childhood. And Nick had found himself wanting to be a man of honor, a man like Harry. It was a goal Nick would never reach, though, because the old man had raised the bar too damn high.

Loyalty ran deep for the aging detective, and like each one of the other twelve or thirteen guys known as Harry’s Bad Boys, Nick would do anything for Harry. Nick owed the man far more than a trip to Minnesota on the cusp of winter. A hell of a lot more.

Harry had taken Nick to ballgames and invited him to backyard barbecues. He’d even paid Nick’s first semester registration at the local junior college, making him feel as much a part of the Logan family as Harry’s own sons.

“Hailey’s my daughter,” Harry had said. “And she’s living in a small Minnesota farm town. I want you to bring her to San Diego. To the hospital, where I can see her. Where I can talk to her. I let her down a long time ago, and I want to apologize, ask her forgiveness.”

Nick found it hard to believe Harry could have let anyone down. Ever. He was too much of a straight-arrow. Too dedicated to his family and the youth in the community. Youth at risk, as Nick had been.

Nick had plenty of questions, but he wasn’t about to force his old friend to say more than he wanted to.
“Find Hailey Conway,” Harry had asked Nick from his hospital bed.

It was as simple as that.

Nick looked at his watch. The sooner he found the woman, the better. He’d promised Harry not to return to San Diego without her.

It was a promise Nick intended to keep.