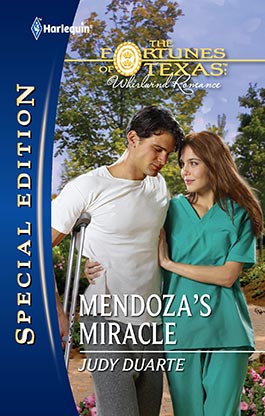 From the Desk of Leah Roberts

Condition: Injured in Red Rock tornado—still hospitalized. Recovering nicely. Too handsome for a hospital bed. Too sexy for his own good.

Course of treatment: Walk away, STAT!

The Fortunes and the Mendozas had been anxiously awaiting Javier's recovery. Finally he was on the mend, and no one was happier than his nurse, Leah Roberts. She'd been his rock during the ordeal, but now she was having thoughts that were most unprofessional. She was losing her heart to her flirty, sweet-talking patient.

But did Javier also have a case of true love?

Javier Mendoza might have been a little irritable and short-tempered with his family just moments ago, but all he really wanted was for them to go home and leave him alone.

When they finally got the hint and left his hospital room, he was relieved. That is, until they gathered out in the hall and began to whisper.

"Maybe it's time for us to call in a psychologist," his father said.

Luis Mendoza might have lowered his voice, thinking he couldn't be overheard, but Javier wasn't deaf.

He glanced at Leah Roberts, who stood at the foot of his bed. From the expression on his personal Florence Nightingale's pretty face, he realized the comments they'd both overheard had struck a sympathetic chord in her.

"They mean well," Leah said, her own voice lowering to a whisper so the family members who'd gathered in the hall couldn't hear her words.

She was right. His father and siblings had held prayer vigils while he'd been in the ICU and had continued to visit regularly, even after his condition had been upgraded and he'd been moved to a regular room. He was grateful for their love and concern, of course, but there wasn't anything wrong with his mental state. Dragging this whole thing out any longer than necessary wasn't going to get him back on his feet any sooner.

Two months ago, a tornado had struck Red Rock, and in the blink of an eye Javier's life had been permanently altered.

Of course, all he knew about that fateful day—and for the next three to four weeks after—was what others had told him and what he'd read in the old newspapers Leah had brought for him to read.

In fact, there was very little he recalled after the December day his brother Marcos had married Wendy Fortune. The two families had celebrated the Christmas holiday together, then the Atlanta-based Fortunes had planned to fly home to attend a New Year's Eve party.

It had taken several vehicles to deliver them all to the airport, and Javier had been one of the drivers.

The wind had kicked up and the clouds had grown dark, threatening to ground all the flights. So the travelers had hoped to get out of Red Rock before they were forced to wait out the storm.

Then the unthinkable happened. A tornado struck, killing several people and injuring others.

Javier, who'd almost gotten a one-way ticket to the Pearly Gates, had been one of the "lucky ones," which was what more than one medical professional had told him. In fact, his injuries had been so serious that it had been weeks before anyone knew if he'd pull through or not.

He supposed he had his family's prayers and the skill of one of the top neurosurgeons in the country to thank for that.

Still, he'd been in a coma for over a month, which had been medically induced for part of that time, and had finally regained consciousness in February.

His family and the many specialists who'd treated him had been relieved to learn he hadn't suffered any lasting brain damage, although he'd suffered a lot of confusion those first few days.

His recovery was going to be far from easy. He still faced some physical hurdles, since multiple fractures in both of his legs would require extensive rehab in the facility attached to the hospital, but at least he'd be able to walk again. For a while, doctors hadn't been sure.

Jeremy Fortune, Javier's orthopedic surgeon, as well as a longtime family friend, had been honest about what the future would bring. The physical therapy would be grueling, but it was necessary for Javier to regain full body function.

"You're young," Jeremy had said. "And you're strong. With rehab, you'll eventually be as good as new."

But Javier wasn't convinced of that. He'd lost a lot of time, not to mention a once-in-a-lifetime business opportunity that had slipped through his fingers while he'd been out of commission. And thanks to the blasted confusion—which was better but still lingered—there'd been countless other details and opportunities lost to him.

Sure, the brain fog had cleared some, and with time, he'd probably regain his physical strength. But deep inside, where no one could see, something had changed.

His family seemed to think he was depressed. Okay, so maybe he was—a little. Who wouldn't be?

For all of his thirty-one years, he'd relied on quick wit and keen business savvy to see him through. But after the injury and weeks of recovery, he feared the healing had stopped.

What if he never got his mental mojo back?

The question itself struck fear deep into his battered bones. And it was something he'd never admit to anyone, not even to a shrink.

Javier again looked at Leah, whose long, auburn hair was pulled back with a clip, whose expressive hazel eyes seemed to know what he was thinking and feeling most days without him ever having to say a word.

She was the only person whose presence didn't make him want to scream. Maybe that was because she hadn't known him before and didn't have any preconceived notions of how he "should" react to things. Or maybe he just appreciated the fact that she didn't walk on eggshells around him and act cheerful when she wasn't.

Then again, she was a beautiful woman, inside and out. How could he not want to be one hundred percent whenever he was around her? After all, he might be wounded, but he wasn't dead. And certain parts of his body weren't in need of any rehab at all.

Leah made her way to the head of his bed and rested her hand on the railing. Her fingers were long and tapered, her nails neatly manicured. Her touch, as he'd come to expect, was light yet steady and competent.

He was tempted to reach out to her, to place his hand over hers. But before he could ponder the wisdom—or the repercussions—of doing so, she said, "I'll ask them to continue their discussion in one of the conference rooms."

That would help. "Thanks."

She nodded, then left his room to join his family in the hall.

The last voice he heard was Leah's saying, "Why don't you come with me."

As Leah led the Mendoza family past the nurses' station, their footsteps clicking upon the tile floor, she said, "Javier was listening to your conversation, so I thought it would be best if you finished your discussion in private."

"Aw, man." Luis, Javier's dad, raked a hand through his hair. "I didn't mean for him to overhear what we were saying. It's just that we've been worried about him."

Leah had been concerned, too. She'd noticed the change in Javier's attitude whenever his family came to visit. She'd even asked him about it one day, although he'd shrugged it off as no big deal and then changed the subject.

"Being incapacitated is a big blow to a man like him," Leah said as she walked along the hall.

They all nodded in agreement.

"It's too bad you didn't know him before he was injured," Luis said.

Leah would have liked knowing him before. Even in his injured condition, she'd found him to be intriguing. And if truth be told, she stopped by to visit him even on those days when she'd been assigned to other rooms and patients.

"Javier is a contractor and a real estate developer," Luis added as he strode next to Leah. "And he's always been enthusiastic about whatever project he was working on. In fact, those deals always seemed to energize him. But now, if we mention anything about business or properties, he changes the subject."

Leah had picked up quite a few details about her patient, including the fact that he'd been very successful with his land dealings and that he had a nice house in one of the better areas of Red Rock—custom-built just for him.

"He's also a part-time musician," Isabella, his older sister, added. "And he's an athlete. He played both tennis and golf before his accident. But if we mention music or sports, he clamps his lips tight and his expression turns grim."

"I'm sure, in time, he'll play golf and tennis again." Leah opened the door of the conference room that was located just beyond the nurses' station and waited for Luis Mendoza to enter, followed by his son, Rafe. Next came Rafe's wife, Melina, and Isabella.

"My brother has always been positive and energetic," Isabella said. "So it's heartbreaking to see him depressed."

"I'm sure it is." From everything Leah had gathered, Javier Mendoza was bright, ambitious and successful. She'd also overheard his family mention that he had an active social life and that he was one of Red Rock's most eligible bachelors.