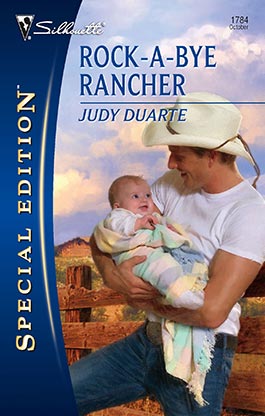 And Clay Callaghan was ready to provide one for her. The Texas cattle rancher knew next to nothing about caring for infants, but he’d never turn his back on his own flesh and blood.

As guardian of her younger siblings, attorney Daniela de la Cruz offered both legal and child-reading expertise. Yet it was clear this handsome cowboy needed—and wanted—more from her. Well, Daniela could never turn down a child in need.

“Pobrecita.” Padre Luis Fernando clucked his tongue and shook his head, as he looked at the solemn-faced baby girl lying in a rustic, hand-woven basket. “Three months old and no name. But don’t worry, little one. I’ll find someone to take you home, someone to love you.”

The old priest reached out a gnarled hand to the child, waiting for her to latch on to his finger, to grasp the hope he offered. But the little girl merely lay there, lost, alone.

An hour ago, one of the altar boys had come to him and spoke in confidence, mentioning the orphaned baby and the bitter, old woman who’d been caring for her.

“Padre,” the boy had said, “the church must do something. That baby isn’t safe.”

Manuela Vargas, a craggy-faced widow who donned dark clothing and lived alone, was considered to be loca by some of the other parishioners. And the children who lived in the community often called her la bruja, the witch.

Luis believed they were referring to her appearance and demeanor more than anything. Yet he had to admit that when he’d learned of the mother’s death he’d been a little uneasy knowing the baby would be living with a woman who rarely smiled or interacted with the community. He’d hoped the baby would be good for her, but maybe he’d been wrong.

In a hushed tone, the boy had told him, “Manuela said that God punished Catalina for her sins and let her die giving birth. And she said the baby should have died, too.”

The padre hadn’t needed to hear any more. He’d immediately gone to visit Manuela. And when he’d seen the condition of the baby, he’d convinced the old woman to give the child to him.

There had been no argument. Manuela had placed the baby girl, as well as the personal effects of the girl’s mother, into the basket and gratefully passed her burden to the priest.

Luis wished he’d stepped in sooner. If he had, perhaps the young mother might still be alive.

Catalina Villa, a college student from a village nearly one hundred kilometers to the south, had shamed her family by getting pregnant. Embarrassed by her condition because she was unmarried, they had wanted her to bear her child in secret. So she was sent to live with her grandmother’s sister, Manuela.

But considering Manuela’s attitude about sin and punishment, Luis wondered whether a midwife or doctor had even been called when Catalina’s labor started. Of course, there were some things only God knew.

The funeral had been solemn and private, with only Manuela and the baby in attendance. And the only one who had cried had been the infant.

The padre reached inside the basket that served as a crib and withdrew the prayer book that had been tucked inside. He opened to the page where the young mother had written the birth date and parentage of her child.

Catalina, he suspected, had died before entering the child’s name. And if she’d uttered it to anyone, Manuela had not said.

He unfolded a sheet of paper, the start of a letter.

Dear Mr. Callaghan, he read. You do not know me, but I loved your son Trevor very much. When he died, I did not think I could live without him. And when I learned I was carrying his baby, I was both pleased and saddened.

My parents are very strict and believe that I have failed them. They have sent me away in shame. So I write to ask if my baby and I can come to Texas and live on the ranch with you.

I know you and Trevor were not very close, but if you can find it in your heart to accept us into your family...

The letter was unfinished, unsigned.

The priest whispered a prayer for the mother who’d died, leaving the child at the mercy of a woman with a cold and bitter heart. Then he let out a pent-up sigh and studied the fair-skinned baby girl with a head of dark, downy hair.

Her cheeks lacked that rosy, healthy hue one expected to see. And her eyes, a golden brown, showed no spark of life. No hint of love.

He surmised she’d been provided with an occasional bottle of goat’s milk, but nothing else. No warm embrace. No whispered words of love. Perhaps her father’s relatives would be more welcoming than her mother’s.

He picked up the telephone.

Twenty minutes and several calls later, he located Clay Callaghan at a ranch outside of Houston.

A woman answered. Her clipped, professional tone suggested she was a servant of some kind. Luis introduced himself as a priest from a small village near Guadalajara, then asked to speak to Mr. Callaghan.

While he waited for the woman to summon the rancher, Luis again glanced at the basket and was glad to see the baby girl had fallen asleep. The sadness in her eyes haunted him in a way no other child’s had.

“Por favor, Dios,” the padre prayed. “Touch Senor Callaghan’s heart. This baby needs someone to love her, to bond with her. She needs a home.”

A deep, baritone voice sounded over a crackling telephone line. “This is Clay Callaghan.”

“Senor...Sir, I am Father Luis Fernando, a priest from Rio Seco, a small village outside of Guadalajara. One of my parishioners gave me an orphaned baby girl. I have reason to believe her father was Trevor Callaghan.”

The line seemed to have gone dead.

“Sir? Senor Callaghan? Did you hear me?”

“Trevor died in a car accident nearly a year ago,” the man responded.

“Si. I am aware of that. In Mexico, while attending the university in Guadalajara, no? But before his death, he and a young woman named Catalina Villa Montez conceived a baby. From what I understand, they planned to marry. But your son died before they could say the vows.”

“What about the child’s mother?” the American asked, his curiosity validating his interest.

The padre quietly released the breath he’d been holding. “Catalina was a bright young woman from a poor village. The townspeople and her parents pooled their money to send her to the university, in hope that she would return with an education and help the community. But when her family learned she was pregnant, they were angry and embarrassed. They sent her secretly to Rio Seco, where she bore her baby in the home of a distant relative. With your son dead, senor, I believe she feared there were no other options.”

“You said the baby was orphaned.”

“Si. Catalina died after childbirth and left the newborn in the care of an elderly aunt who can not keep the baby any longer. And if you will not take the baby girl to live with you in Texas, I will be forced to deliver her to an orphanage.”

Silence filled the line, then the deep, graveled voice asked, “How do you know my son is the father?”
“There are blood tests that can prove it, but I was given the mother’s personal effects, including a photograph of the baby’s father, a handsome, blond-haired young man standing next to an airplane. I also have an engraved, black onyx ring.”

Again silence. And a graveled clearing of the throat. “Where can I find the baby?”

The padre gave him directions from the airport in Guadalajara to the church.

Surely, the American grandfather would be more loving than the old Mexican caretaker had been.

The padre prayed that he would.