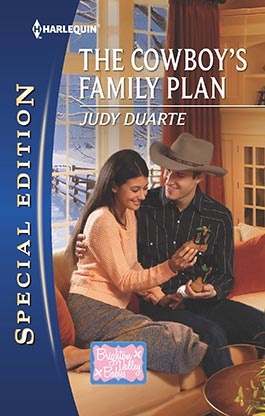 Solemn rancher Alex Connor was looking for a good woman. To be more precise, he was looking for a surrogate to bear his babies. He had it all figured out: he'd be a single dad completely devoted to his children. But after his first meeting with obstetrician Dr. Selena Ramirez, all his carefully made plans flew out the window.

Selena knew she'd be able to help Alex, though not in the way he might imagine. Common sense told her to run when the sexy green-eyed cowboy admitted he wanted her. What kind of crazy fate had brought a man yearning for offspring to a woman who couldn't have any? What kind of crazy girl would gamble on a man whose heart was already taken?

As Alex Connor reached the door of the community education room at the Brighton Valley Wellness Center, a shudder of apprehension shot through him, and he froze momentarily.

Once he stepped inside, he was going to feel as out of place as a circus clown on a wild bronc, but he wasn't going to wallow in it. He owed it to Mary, his late wife, to learn all he could about surrogacy. So he shook off his uneasiness, swallowed his pride and entered the classroom, his limp a bit more pronounced than it had been when he woke up this morning.

The room wasn't full, although there were plenty of people already seated, most of them couples, whose expressions ran the gamut from hopeful to uneasy to I'd-rather-be-anywhere-but-here-tonight. And Alex knew how every one of them felt, especially the ones who looked as if it wouldn't take much for them to bolt.

A few of those in attendance were women on their own, with no husband or partner in sight. Alex did his best not to look at them, not to think about Mary, who'd had to research in vitro fertilization on her own four years ago.

Now here he was, learning what he should have learned with her back then.

Alex wasn't the only man in the room this evening, but he was the only one who'd arrived by himself. Shaking off his uneasiness, he chose a seat in the front row and placed his Stetson on the empty chair next to him. Then he waited for the class to begin.

It had been nearly three years since he'd lost Mary, along with the baby she carried. And now that he'd dealt with the grief, he was determined to do everything he could to make sure his and Mary's remaining two babies, just frozen embryos now, had a chance to live. Unfortunately, Mary had been the one who'd had any real understanding of the whole in vitro process. She'd merely showed him the papers he needed to sign and told him how much to pay, where to be and what to do. So he found himself at a bit of a loss now—and a bit guilty at not being more involved during the whole clinical part of the process.

He would have made an appointment to talk to Dr. Avery, Mary's obstetrician, if the guy hadn't retired a while back and sold his practice to a Dr. Ramirez.

Alex had planned to talk to the new doctor, but as luck would have it, the guy was giving a series of three lectures on fertility options on Tuesday nights.

Luck, huh? Alex might have been fortunate to chance upon that flyer, but his reason for being at the wellness center in the first place had been the result of a preventable accident and an order for physical therapy.

Nearly six months ago, he'd walked behind his prize stallion, Blazing Thunder, and gotten kicked, which had been a dumb move on his part. As a result, he'd suffered a broken kneecap, which had sidelined him for months. He'd needed orthopedic surgery, and after the bones had healed, he'd been sent to physical therapy.

Last week, while working with Maria, his therapist at the wellness center, he'd spotted that poster. Because one of the topics dealt with finding and hiring a surrogate, he'd signed up to take the classes, which were being taught by none other than Dr. Ramirez.

So call it luck or fate or chance, here he was.

He'd planned to sit through this first lecture, then afterward, catch the doctor alone and pick his brain.

Mary had thought the world of Dr. Avery. Alex just hoped that Dr. Ramirez, whoever he was, would be just as competent.

So what was keeping him?

Alex glanced at his wristwatch, noting it was almost seven. The doctor ought to be here by now.

Moments later, he heard the sound of the door swinging open at the back of the room.

Alex turned and glanced to the right, just as an attractive brunette wearing a white lab coat over a green dress strode toward the lectern.

Alex wasn't sure why he'd assumed that the obstetrician would be a man. It's not as though he had any qualms about a female physician; it's just that this one appeared to be too…young…too petite…too attractive.

But she certainly had an air of confidence about her.

He slowly turned to the front and waited for her to step behind the podium.

As she did so, she offered the audience a pretty yet professional smile and said, "Good evening, everyone. I'm Dr. Ramirez."

Her voice held a slight Spanish accent, although just barely, and he listened as she began covering the basic causes of infertility. Alex wasn't all that interested in that particular topic, though. And as he tried to focus on what she had to say, he couldn't seem to think about anything other than the fact that none of his doctors had ever looked like her. And was he ever grateful for that.

If the lovely Dr. Ramirez would have walked into an exam room while he'd been seated on the table, she would have had to treat him for an excessive heart rate and high blood pressure.

For that reason, he'd better rein in his thoughts and listen to what she was saying.

While he did his best to concentrate on her words, he was struck by her mannerisms: the way she cocked her head slightly to the side, the way she gripped the side of the lectern and leaned forward to make a point, the way she lifted her left hand—which wasn't wearing a ring.

Several times during the talk, he could have sworn he'd caught her looking right at him, her cheeks slightly flushed. And when she turned away to scan the audience, she cleared her throat and took a moment to skim over her notes.

Maybe public speaking made her nervous.

Or maybe she found a lone male sitting in the front row to be a little unnerving.

On the other hand, it might have been something about Alex that had caught her eye.

Nah, it couldn't be that. He'd probably just imagined her interest in him. Sleeping solo in a king-size bed for the past three years did crazy things to a man, he supposed, made him think that it was time to start looking for another woman to share his life once again.

And right now, that's the last thing Alex needed to think about. He had a surrogate to hire. Then, God willing, both remaining embryos would be implanted and he'd have two babies to raise.

As the audience broke into applause, Alex clapped, too, realizing the lecture was over and that he'd missed almost everything Dr. Ramirez said.

When she asked if there were any questions, he kept his arms crossed over his chest and let the others raise their hands instead. He had plenty of questions, of course, but most of them had to do with surrogacy, which she was supposed to discuss during the last class.

Finally, his classmates began to file out of the room, providing him with the opportunity he'd wanted—to quiz the doctor in private.

So he remained in his seat, while she gathered her notes and folded them back in the file on the podium. Then he rose and made his way to her, his Stetson in hand.

When she noticed his approach, her movements froze and her lips parted.

Her brown eyes, which were almost hazel, widened. Her thick dark lashes, natural and unenhanced by mascara, fluttered once, twice. Then she licked her bottom lip and cleared her throat.

Clearly he'd caught her off guard, so he offered her a friendly grin and said, "I wondered if I could have a few minutes of your time."

Selena Ramirez hadn't expected the handsome cowboy who'd been sitting in the front row to come up to her after her class. In fact, his presence had caused her to lose her train of thought several times during the lecture.

What was he doing here?

Where was his wife or partner?

And why was he coming to speak to her now?

He must have read the questions in her eyes because he added, "I'd like to pick your brain, if I may."

Goodness, right now, he could "pick" just about anything he wanted. But she shook off the inappropriate thoughts. She'd certainly provided time for questions and answers, but maybe he was too embarrassed or shy to speak in front of people. So she asked, "What did you want to know, Mr…."

"Connor. Alex. My late wife was a patient of Dr. Avery."

Selena wasn't sure what had stunned her the most, the fact that he was a widower or that he'd come to the lecture on infertility by himself.

"I'm not sure I understand," she said.

"I'd like to ask you a couple of questions that I didn't want to bring up in front of everyone else."

She could understand that, but she wasn't able to talk to him here and now. "There's a board meeting scheduled at eight, so we'll need to clear the room."

Disappointment swept across his brow, revealing an intensity she hadn't expected, an emotion she couldn't quite peg.

She glanced at her watch, a silver bangle style, then looked up at him and smiled. "But I have a little time. We can talk out in the lobby."

"Why don't we go to the cafeteria?" he asked. "I'll buy you a cup of coffee, latte or whatever."

The suggestion took her by surprise. And so did the boyish grin that set off an impish glimmer in his blue eyes.

She was certainly tempted. She also had a few questions she'd like to ask him. From the first moment she'd scanned the audience and spotted him sitting front and center, his hat lying on the chair next to him, she'd wondered about him. So what would it hurt to spend a few minutes with him in the cafeteria?

His smile broadened, lighting up those eyes like a Texas summer sky and knocking her completely off stride.

How was that possible? She'd never been into cowboys. Not that there was anything wrong with them. It's just that she'd always dated professional men.

Dated? Now that was a joke. When was the last time she'd had a date? Not since settling in Brighton Valley, that was for sure.

She noticed that he seemed to favor his left leg.

A new injury? she wondered. Or an old one?

Either way, she found herself heading to the cafeteria with a man who wanted to "pick her brain."